In the wake of George Floyd’s murder as the rise of protests against police brutality, the team of the LondonSWF has put together a list of films and TV shows that have shone a light on black lives, stories and struggles. We wish to share these with our delegates in the hope of raising awareness around the issue.

This four-part Netflix Series about the stories of the falsely convicted “Central Park Five”, now called the Exonerated Five, broke me down mentally and emotionally. In many ways it is a brutal viewing experience but the powerful and evocative screenwriting and filmmaking of this series has made it a necessary watch for those questioning how the labels of innocence and guilt are dealt.

Jenkins paints a tender portrait of intimacy and family, against the strife racism of 1970s America. Regina King, along with the...

Writers have to trust themselves and others by Elinor Perry-Smith

Marnie Dickens (Thirteen, Gold Digger) and Michal Aviram (Fauda, Project Orpheus) have so much in common, it’s easy to say why this discussion happened the way it did.

They both started out in TV, loving the writing process and appreciated the advantage in terms of understanding the craft and making contacts. They also have similar philosophies on the importance of community, taking a note well and how conflict equals creativity.

Michal and Marnie urged writers to gird their loins. Build relationships within the industry and find your peers. Don’t send out your scripts until they’re as strong as can be. Be accountable and build a good portfolio. You can hear yourself getting better at writing as you hone your craft. Michal recommended reading The Artists’ Way by Julia Cameron.

It’s all about the show

Both writers enjoyed the process of working on shows that didn’t originate with them. Marnie liked being in the service of the...

Lifting the lid on continuing drama by Abbie Heathe

This brilliant session is like sitting down in the Queen Vic with a pint, listening to a couple of mates chatting, and feeling a part of the conversation. It gives you a real fly-on-the-wall insight into the way soaps are written and made.

Both Philip Lawrence and Lisa McMullin have written for EastEnders, so there’s double the value to be had in a really lively, fun hour – and a ton of useful advice.

Philip is the LSF poster boy for the route to writing success. At the 2014 Festival he made a public announcement of his intention to write for Continuing Drama. Six years later, he’s there.

He talks about the time and work he put into that journey, and makes it seem eminently possible: meet people, ask for advice, build up contacts – and make sure you’re vocal about where you’re heading, as people will help.

‘Get Outta My Kitchen!’

Running one of Philip’s recent EastEnders episodes, with both writers... 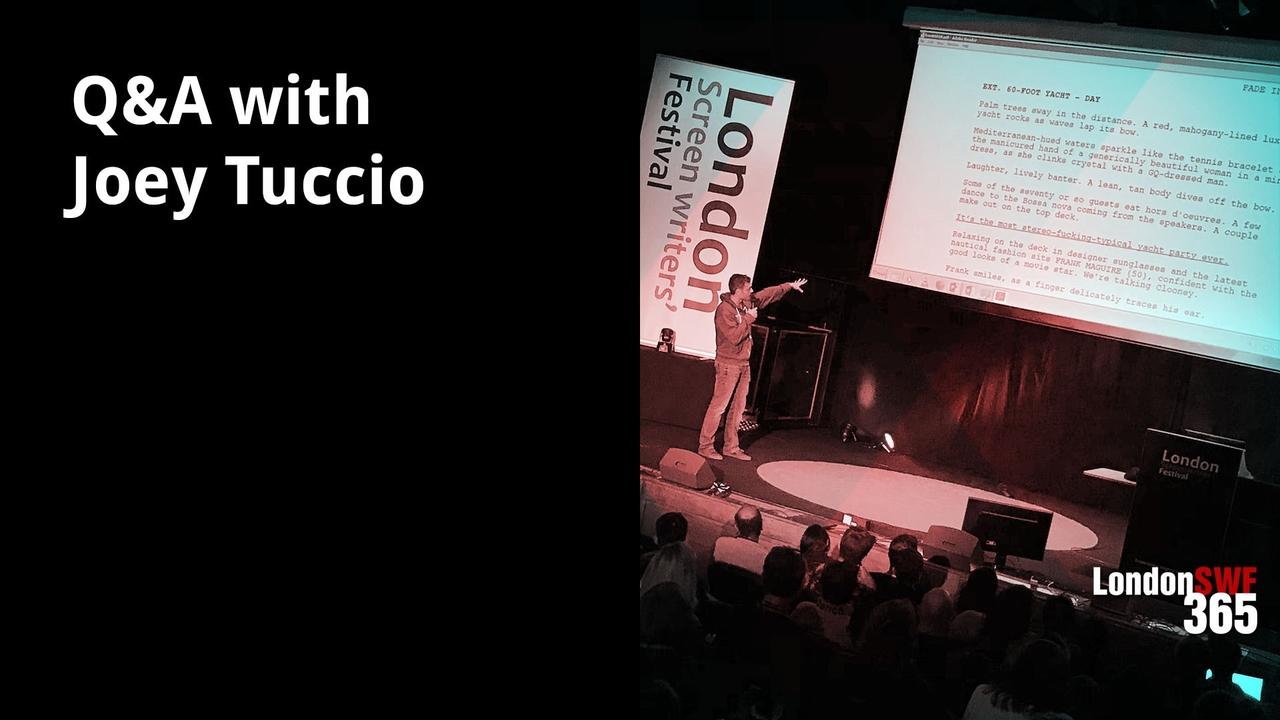 Joey Tuccio, founder and CEO of Roadmap Writers brings plenty of positivity and energy to a conversation about how best to present yourself to the powers that be.

If you’ve ever left a room without establishing a connection, like I have, there’s plenty here to learn from.

Joey says: Be an unapologetic human first. A writer second. A producer tenth.

Every writer needs a personal logline. Know your brand. Your brand is what you bring to the table as a creative person and why you do it.

No executive knows what they’re looking for until they’ve found it, so stick to who you are rather than try to mould yourself to a trend.

Branding will of course mean that you won’t be for everyone but don’t let that stifle your creativity. Know what you want, write what...

Lessons from A Quiet Place by Pat Higgins

Screenwriters and filmmakers Scott Beck and Bryan Woods spent a fascinating hour talking us through the genesis of the silent, terrifying world of A Quiet Place, hosted and moderated by Liz Slade.

Watching A Quiet Place for the first time with a sold-out audience was one of the most memorable cinematic experiences of my life.

The oppressive, enveloping use of silence on the soundtrack completely transformed audience behaviour in the cinema. Breath was held. Popcorn was left unmunched. Even the slightest cough was met with furious glares of disapproval, lest that cough summon the onscreen monsters directly into Basildon Cineworld or (just as awful) break the spell of the movie for even a second.

Over the course of an hour on Friday night, creators Scott Beck and Bryan Woods opened up about how the project came together.

The Birth of a Writing Partnership

Scott and Bryan namecheck the screenplay for The Sixth Sense as a particular formative influence. They shared a love of silent...

When the dogs wake up at 4am, you have to let them out and feed them. The next things to do is go straight to your writing desk and follow in the footsteps of Sean Robert Daniels, member of the elite band of Nicholl Fellows and incredibly successful writer for film and TV.

Most days, Sean is finished by about 8am, perhaps 11am if he’s rewriting.

Imagine the rest of your day with your writing work under your belt. Especially if it means you’ve taken on board Sean’s advice to Embrace the Bad.

Sean takes Pat Higgin’s ‘turn off your inner critic’ one step further and asks you to stop running away from your worst writing (including clichés). Get it done so you can move on to what really counts - the rewriting.

Replying to an attendee’s question, Sean has never abandoned a script because it was bad. It is hard to have so many awful ideas...

A Bold Bright Light: A discussion with Linda Potgieter by Barbara Skubic

The Sunday night session with the master negotiator Linda Potgieter was just what Chris Jones, who also interviewed her, promised it to be. A fast-paced, highly charged awesome session that – at least for me – pulled together nuggets of wisdom I’ve been picking up from other speakers as well. It was not, however, without some controversy, mostly involving red lipstick.

Linda, a South African image consultant, spoke to Chris (and us) about presenting our best selves in a time when a lot of our communication is moving online and our travel opportunities continue to be limited.

Chris decided to lead in with a set of questions and have Linda respond to them. Her responses showed how truly intertwined the topic is.

How do we present ourselves and how do we build confidence in this new paradigm where our communication might be limited to a video call – and how to take the opportunities this presents? How do we navigate the digital world in which...

In the years before Russell T. Davies brought Doctor Who back to our screens, fans were kept sated by the steady stream of audio dramas from Big Finish Productions. Even now, its productions continue to run alongside the TV show, delighting fans across the world. The LSF have brought in two of its regular writers, Matt Fritton and Helen Goldwyn, to discuss their work.

The company started with a group of Doctor Who fans putting together audio dramas about a companion exclusive to the expanded universe of novels (yet more transmedia for you!). After this, the BBC awarded them a license to record stories with the official cast of the classic Who era; this has extended to Doctors and other characters from the 2005 revamp since the 50th Anniversary in 2013.

There is a level of synergy between the audio dramas and the TV show: Big Finish were advised not to write about Queen Victoria while she was due to feature in Season 2, and the Master was off-limits in advance of his...

Advice From Joey Tuccio the Roadmap Master by Sam Kurd

Joey Tuccio is the founder and CEO of Roadmap Writers, an organisation dedicated to helping screenwriters hone their skills and sell their work in this hugely competitive industry.

In this session from 2018’s LSF he shared his knowledge and insight in the friendliest and most charming way, ensuring he left us hanging on his every word.

And boy was there a lot of knowledge and insight to take in! He strayed from the central core of the topic, the ways and means to grab your reader in your first ten pages, but these tangents were just as informative and essential.

There was so much to take in that summing it up is a mammoth task, but here are what I’d say are the most important points he made.

Be Bold – Embrace Your Voice

Joey hit us with a truth bomb – there are “kajillions of writers” out there, far outnumbering the executives. That’s a lot of competition. So you need to consider what makes you stand out. The best way to do that...

Zoom Room Q & A with Nic Ransome by Lesley McGlynn 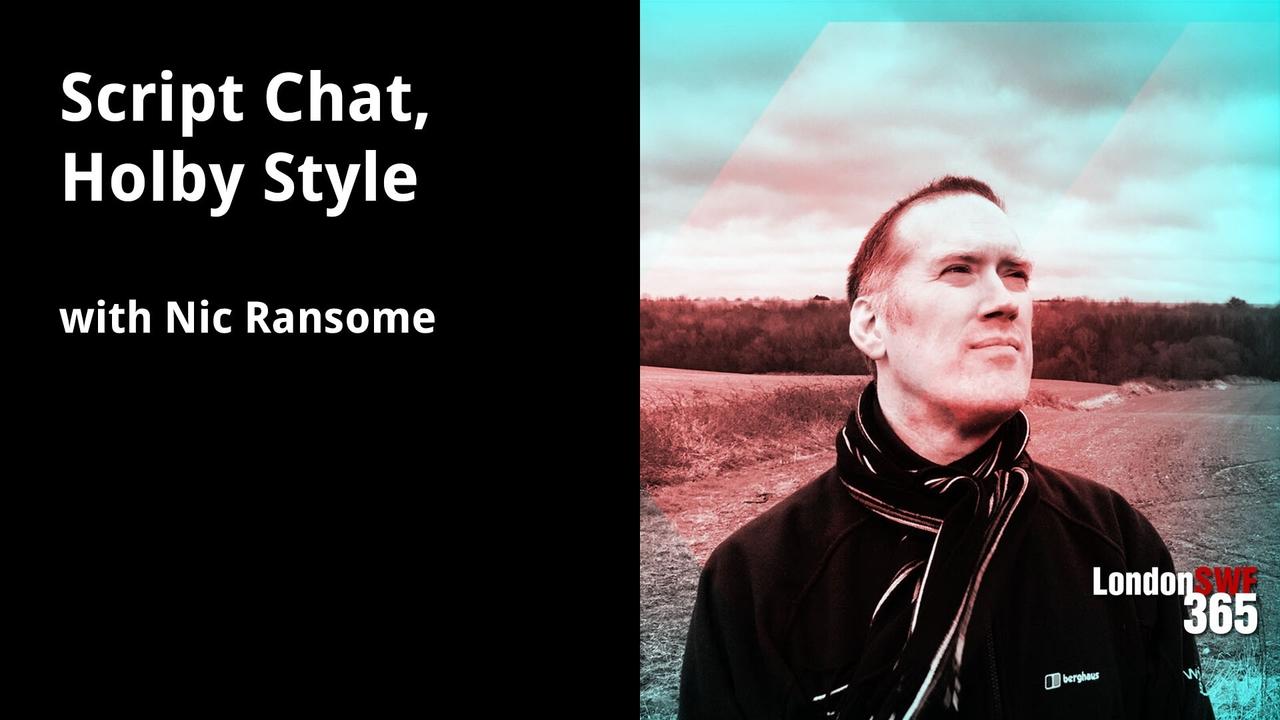 Despite it being a UK public holiday this Monday 25th, Nic Ransome was up in the morning for the festival's keen ‘Zoomsters’ (Zoomies? Zoomdogs? Sorry, I’ll stop) looking for guidance as we all stagger through the valley of characters, genres, storylines and beat sheets.

Nic is a screenwriter, script editor, and story consultant who plied his trade on both sides of the Atlantic, having written for Holby City and Freephonix and developed TV for Silver Pictures Television, Starz, Artists Studio and Bentley Productions.

We jumped right in on an insightful Q&A covering Nic’s special subjects; story & structure, and what can make your projects different to all the others…

Q: “The Map is not the territory” Nic could you explain what that means?

I was glad somebody asked this because despite having written two TV pilots, I had no idea what a map was until this session. When talking about maps, Nic...